Let me not to the marriage of true minds
Admit impediments. Love is not love
Which alters when it alteration finds,
Or bends with the remover to remove:
O no! it is an ever-fixed mark
That looks on tempests and is never shaken;
It is the star to every wandering bark,
Whose worth's unknown, although his height be taken.
Love's not Time's fool, though rosy lips and cheeks
Within his bending sickle's compass come:
Love alters not with his brief hours and weeks,
But bears it out even to the edge of doom.
If this be error and upon me proved,
I never writ, nor no man ever loved.


— William Shakespeare
Posted by Terrie Sandelin at 1:39 PM 3 comments: Links to this post

Probably everyone has their own way of doing these, but I thought I’d show how I sew the inset seams of the spool blocks. NOTE: I set the stitch length on my sewing maching a little shorter to help the accuracy of sewing to exact start and stop points. Also, I do not press the block until it is completely finished, not even finger pressing along the way.

1.  First, I use the stamps I purchased from Cindy Blackberg. 2.  Next, I use Judy Martin’s Ultimate Point Trimmer to trim the corners off the central square. This step isn’t necessary, but it does make lining up the patches easier. 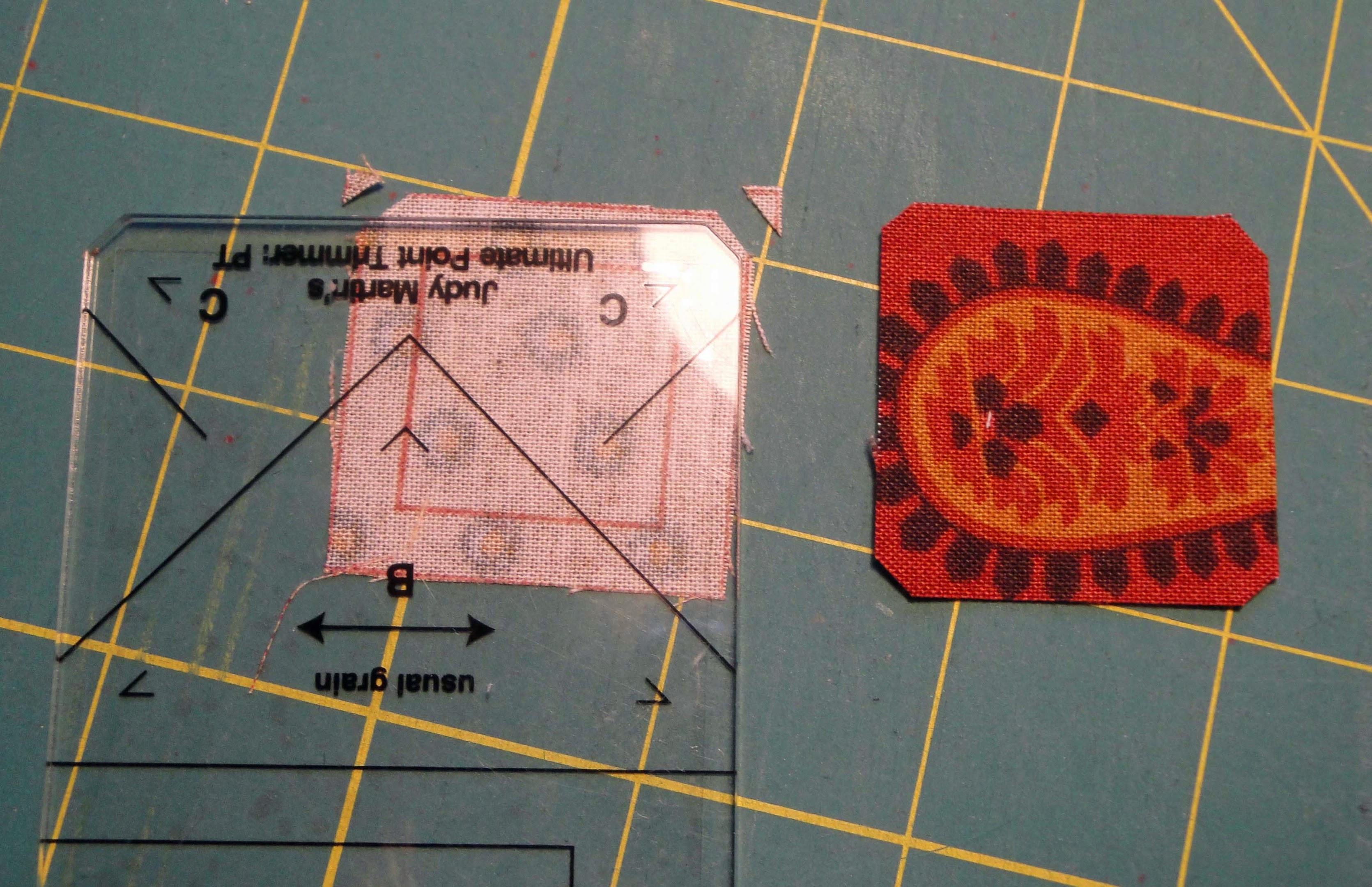 3.  To begin sewing, line up the square against one of the light outer patches and sew along the stamped seam line. Do not sew into the seam allowances, not even a wee tiny bit! You are better off stopping a wee bit short of the intersection point than sewing past it. (NOTE: it doesn’t matter if you choose to sew to the light or dark patches first — I’m just saying to use the light side because it’s going to be easier to distinguish light and dark patches in these directions). 4. After adding the patch on one side, repeat on the opposite side of the square. 5. Place one of the remaining dark patches in position. 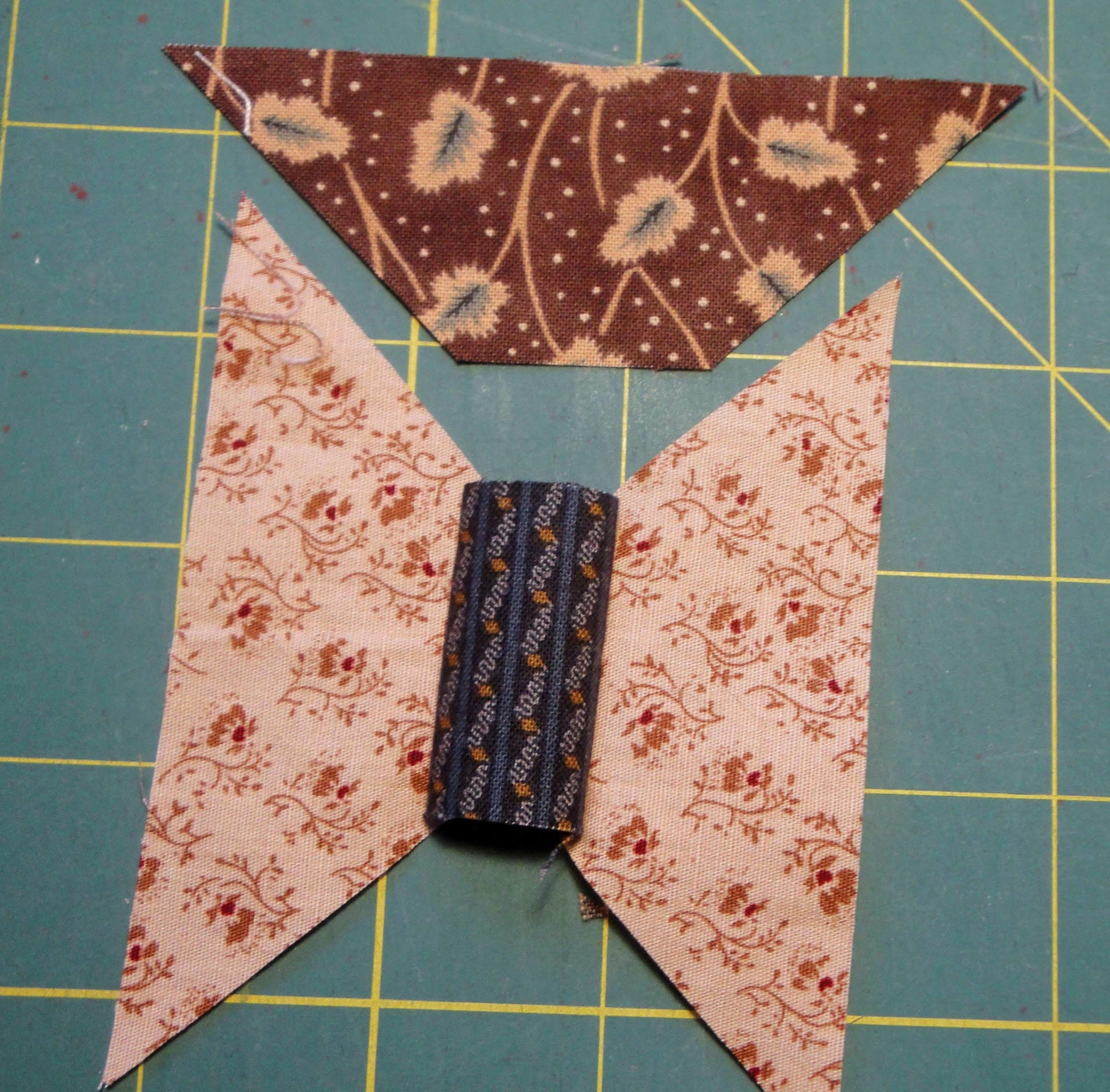 Flip it over and line it up exactly over the light patch on the left side of the block. 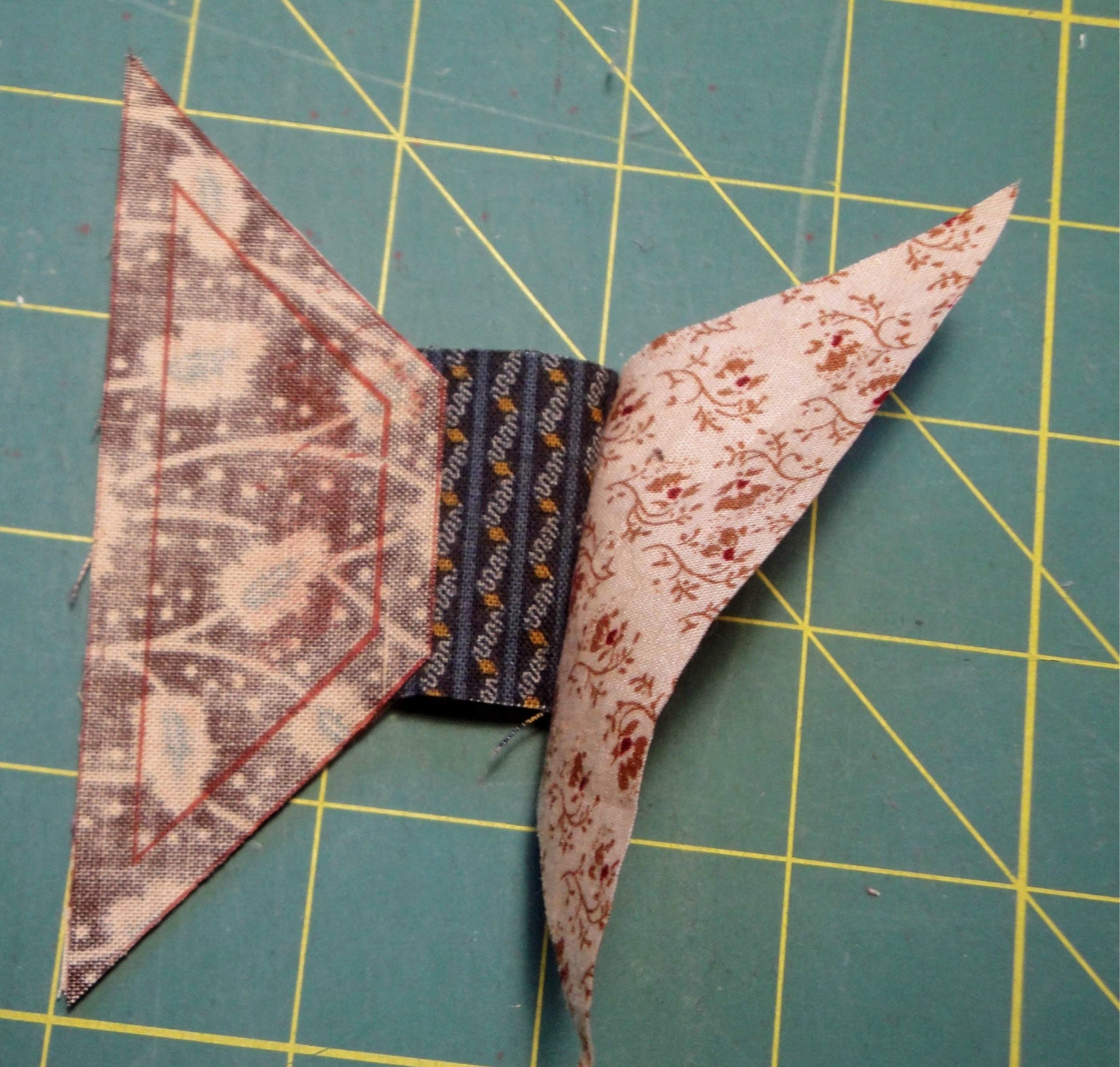 7. Flip the dark patch over so that it is aligned with the other light patch. The seams that are already sewn have a tendency to pull at the patch, so to make alignment easier, I pin along the outer edge. (As you work the block, it will be the light patch on top.) 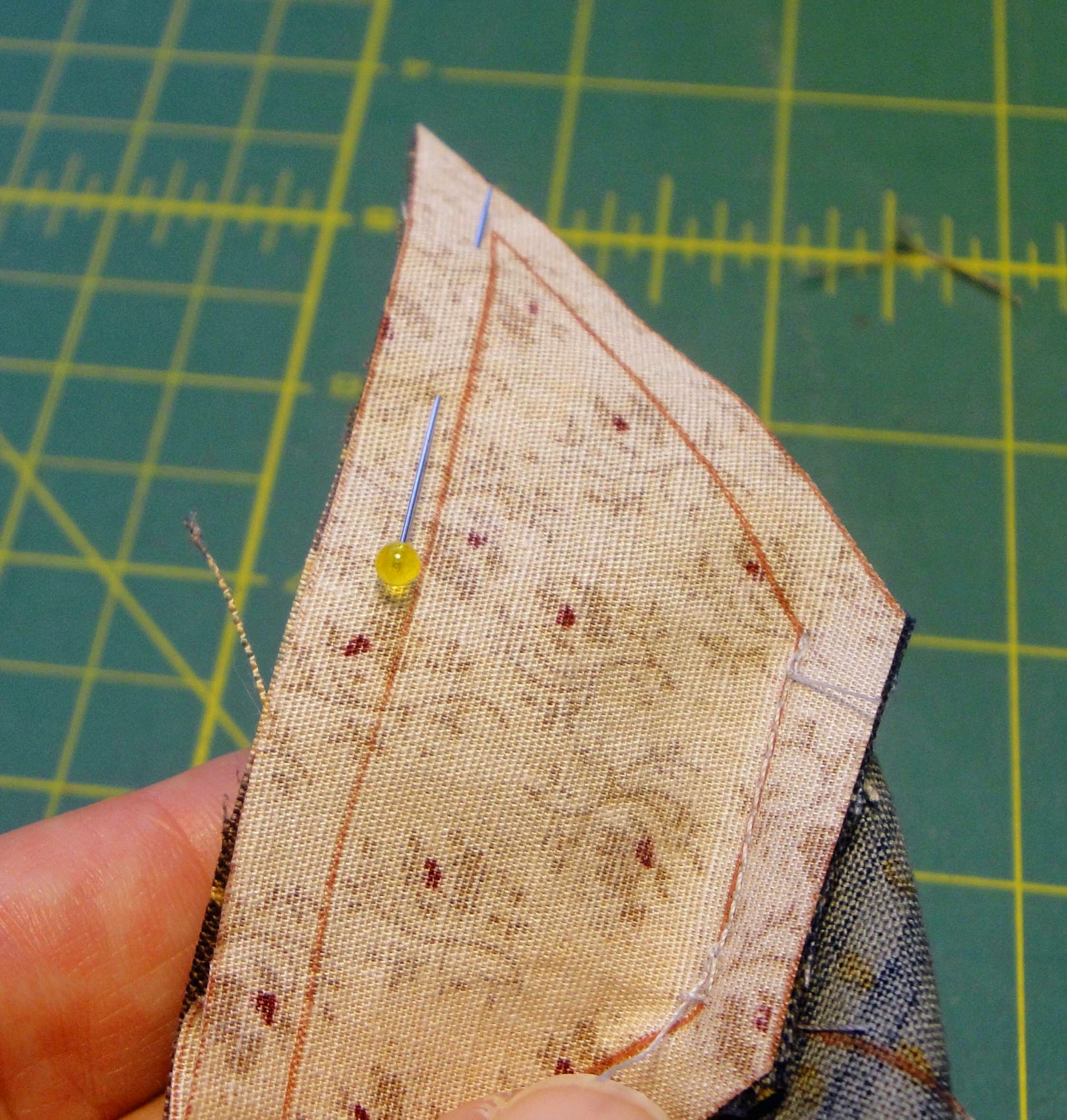 Then I line up the center and make sure that the seam allowance of the inner square is out of the way. 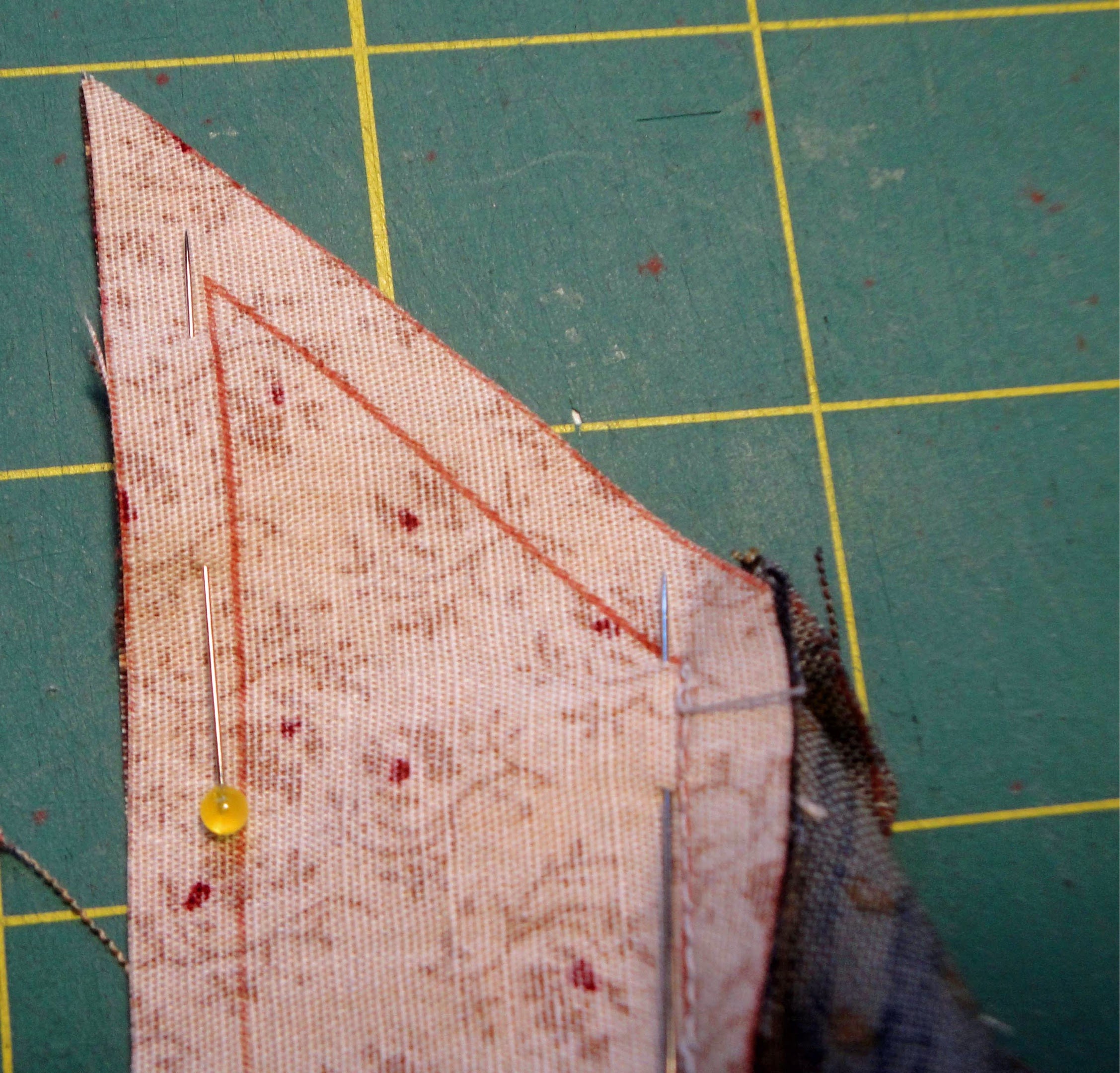 8.  Once again, begin at the outer triangle points, sew through the outer seam allowance but stop before sewing into the inner seam allowance. Be careful not to sew past the previously stitched seam. Remember you are better off stopping a little short than sewing past. NOTE: Since the pins can distort the block while sewing, I pull them out as I approach them.

9.  Now you need to sew the the final inner seam. Line up the patches and sew from stitched seam to stitched seam along the stamped line. Once again, be careful not to sew past the already stitched seams. NOTE: if you have trouble lining up the patches exactly at this stage, it’s most likely an indicator that you crossed seam lines somewhere and stitched into the seam allowance. Look for where the problem is and simply take out the offending stitch. 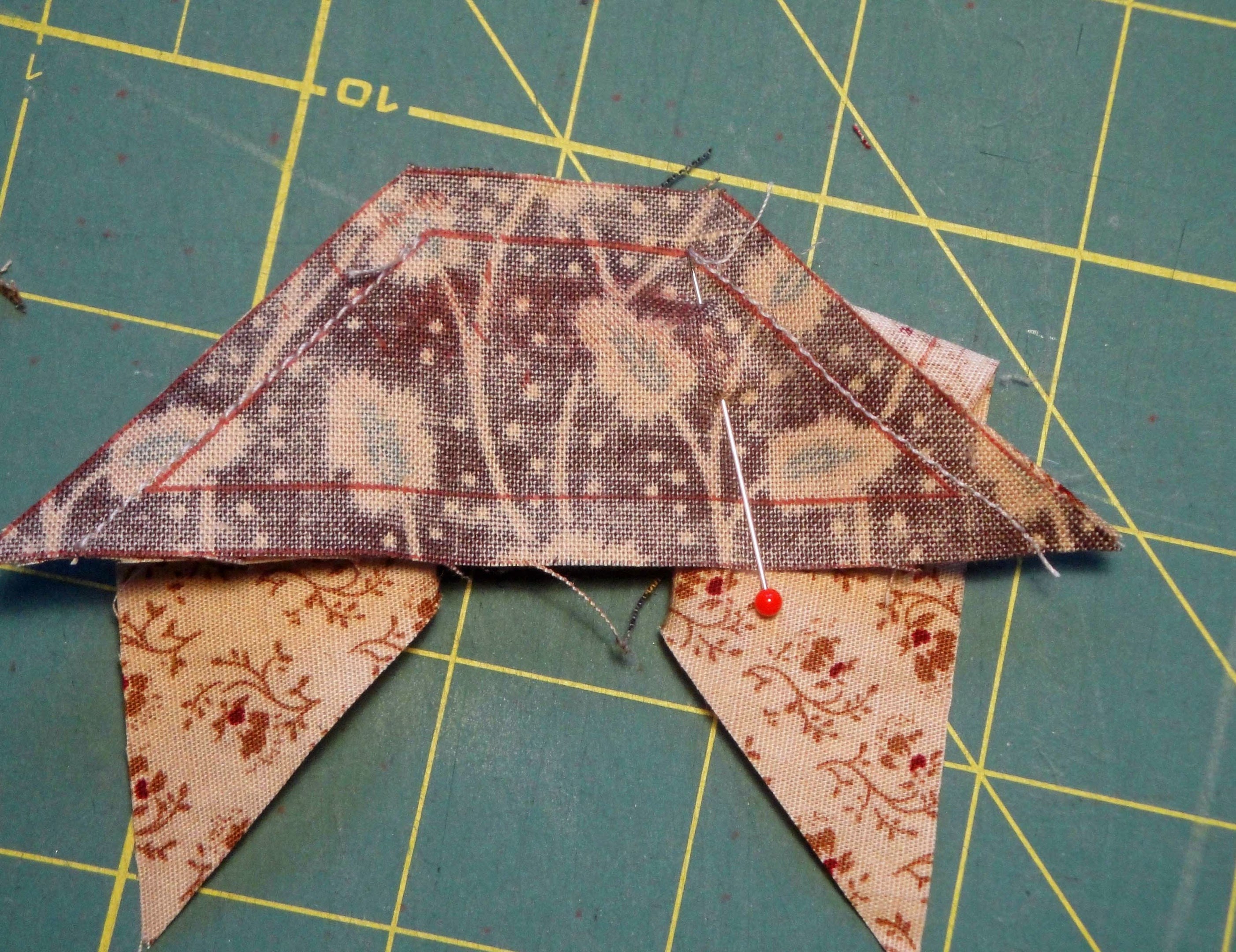 After sewing that final seam, your block should look like this. 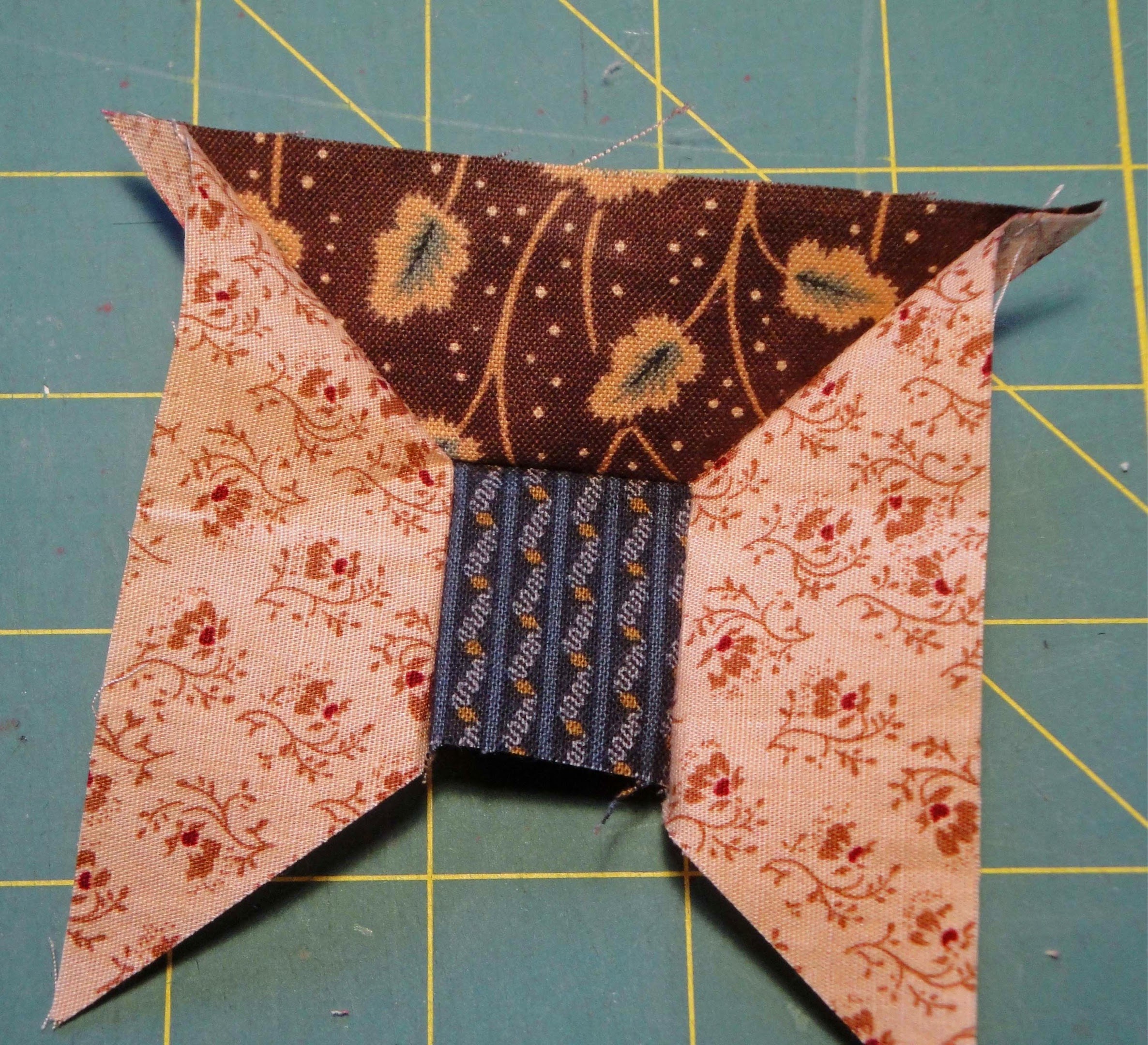 11.  Since I want the seam allowances to lock when I sew the blocks together, I press accordingly. There are two common layouts for this block. One aligns the outer patches light to dark. 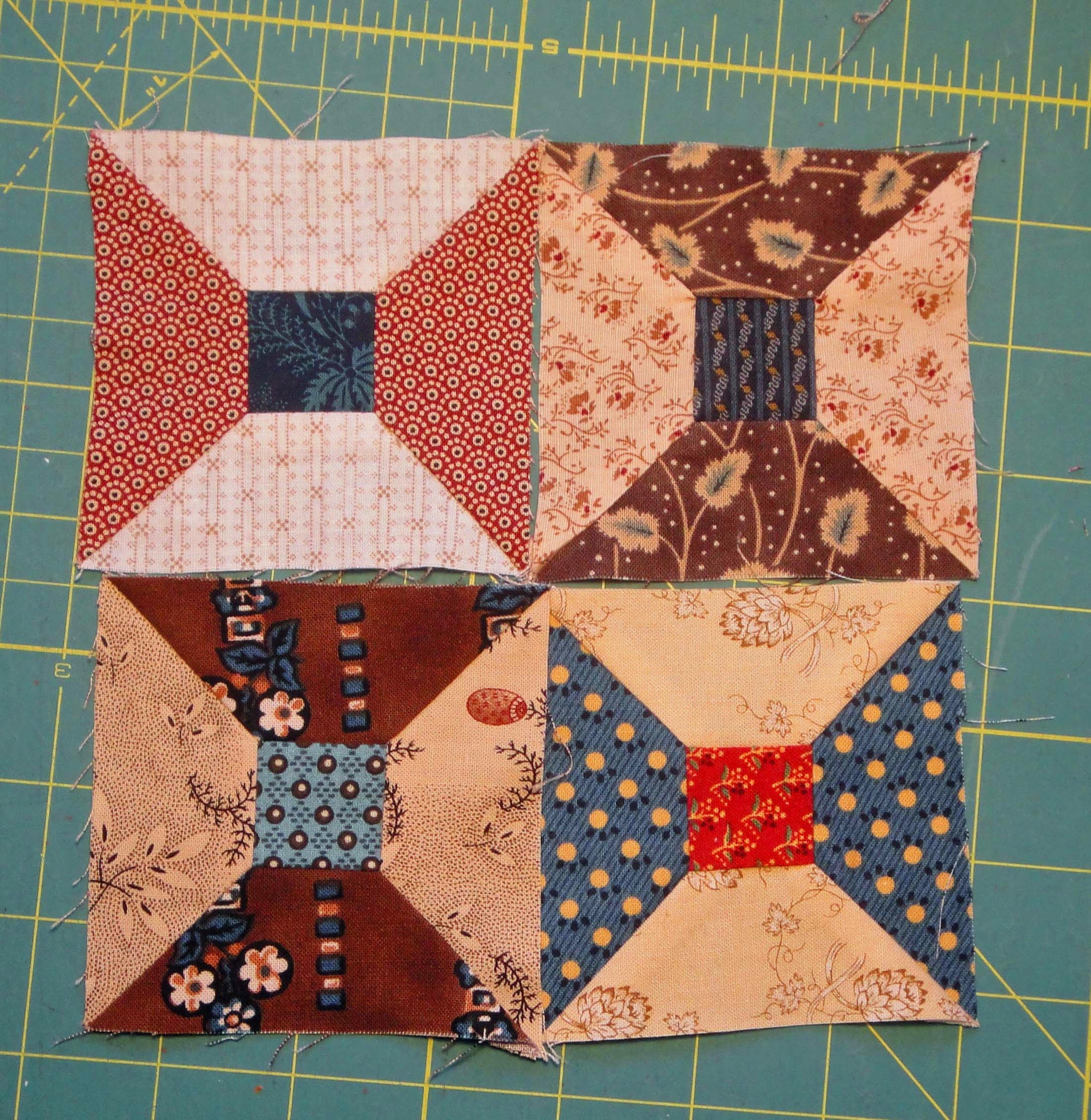 The other stacks the spools, dark to dark. So, for instance, in the picture below, the block on the left presses the long seam allowances to the light outer patches. 1. Press the long seam allowance to the light patch. 2. Circle around and press the short inner square seam in towards the square. 3. Continue to circle around and press the next inner square seam out to the dark patch. 4. This will open up the seam allowances at the center intersection. Simply press them flat.  NOTE: as you press the patches in any given block, the direction of the circle will alternate between clockwise and counter-clockwise — though this should be obvious once you are actually doing it. 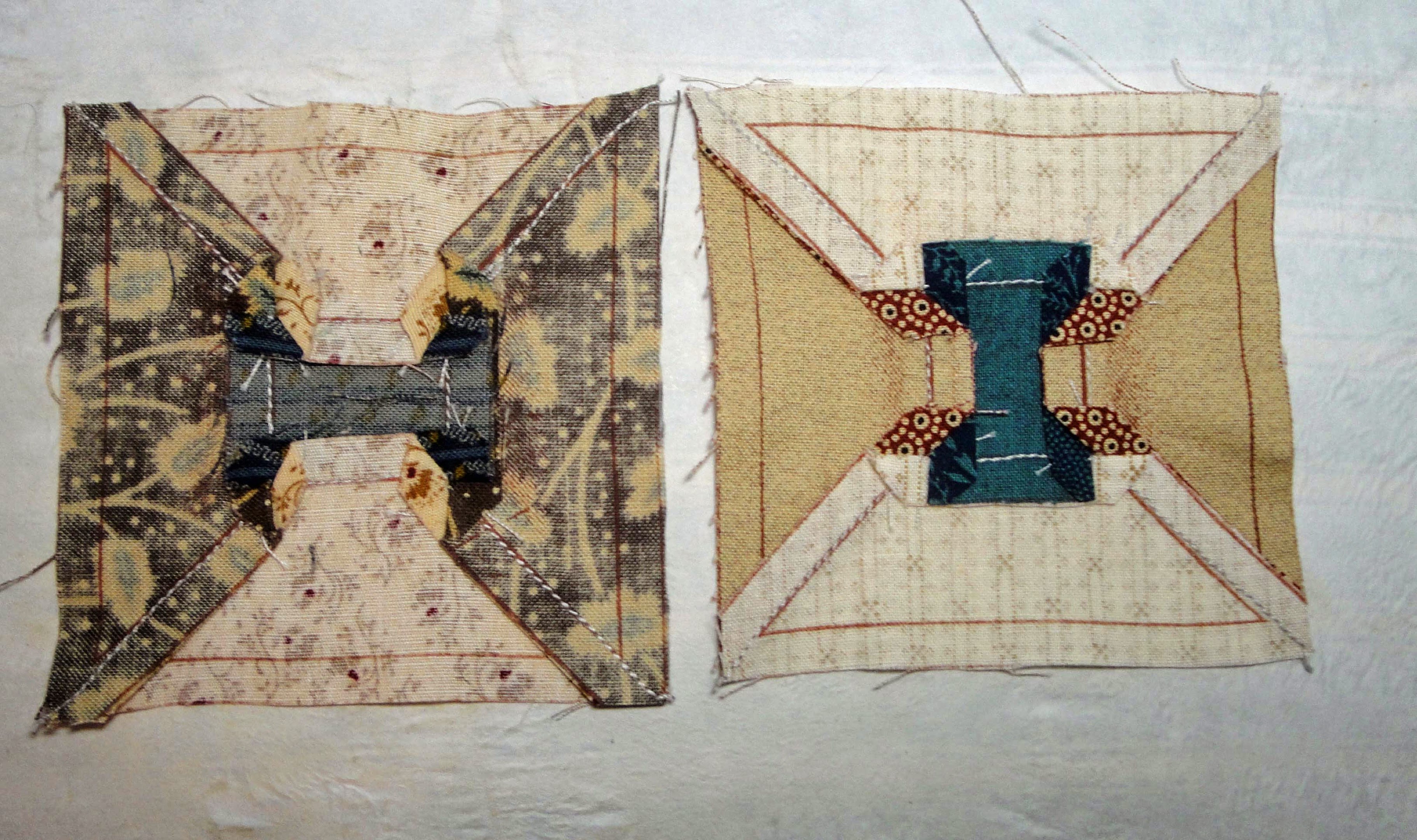 Whew! That probably sounds pretty complicated in the directions, but in actuality, the stamped sewing lines make this block really quite easy to sew. I can have one sewn and pressed in a little under ten minutes.

And because I am a woman on a mission, I finally finished my wee twister quilt. All I needed to finish was a little stitch in the ditch and binding. Sheesh. But, I’m happy now because it’s all done, sitting on the table by my office chair, and making me quite happy as a little mug rug.  Yeah for finishes! Posted by Terrie Sandelin at 12:07 PM No comments: Links to this post

Still working on things in process — and still easily distractible.  So, as I was hunting for one thing in the sewing room, I uncovered another. Oh, yeah — these cute little spool blocks that I thought (how long ago?)  I might like to hand sew. 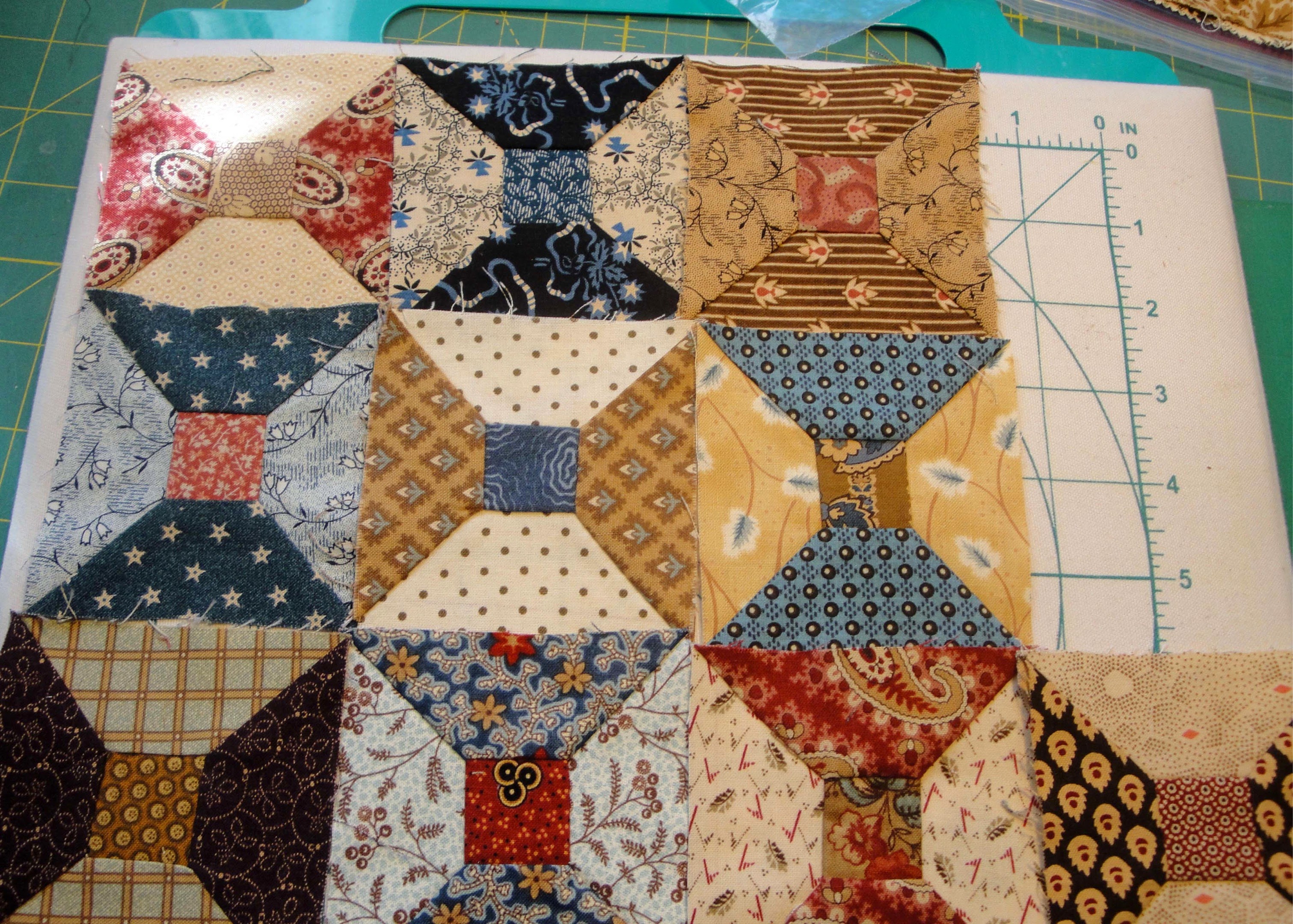 As to the hand sewing part? Yeah. That was a big not. But I’ve been making 8-pointed stars for the medallion quilt, so I’m in mode on inset seams. I decided to sew up a couple of these spool blocks on the sewing machine. Worked just fine. Which meant it was time to pull out the reproduction fabric little bits bin. And stamp some patches. 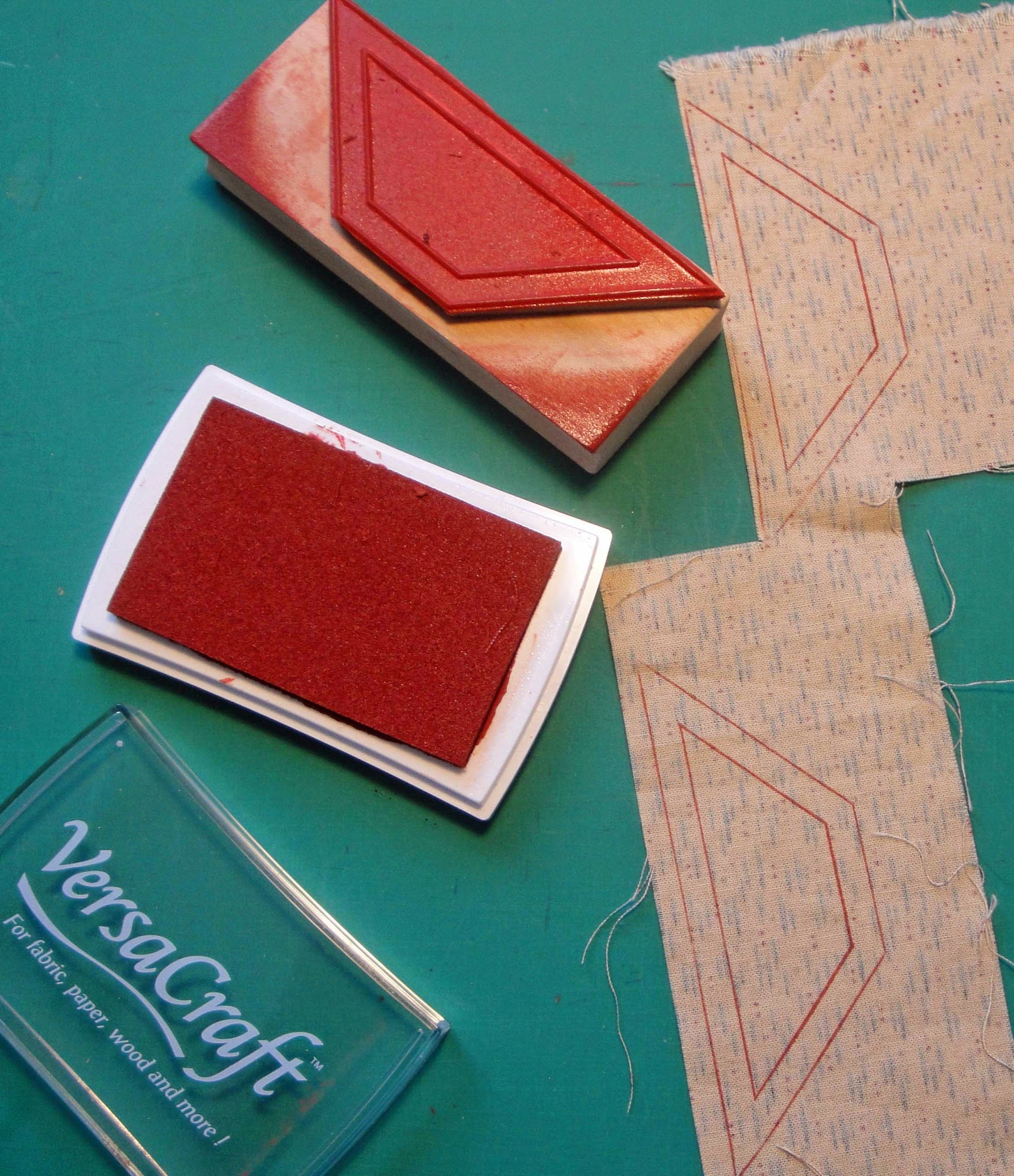 See what’s so nice about those? They have the sewing line marked which makes it really easy to know exactly where to stop for those inset seams. Anyway, I stamped and stamped and stamped some more, and then I cut out (this all took more time than I care to think about), and now I have a pile of patches sorted and ready to sew. 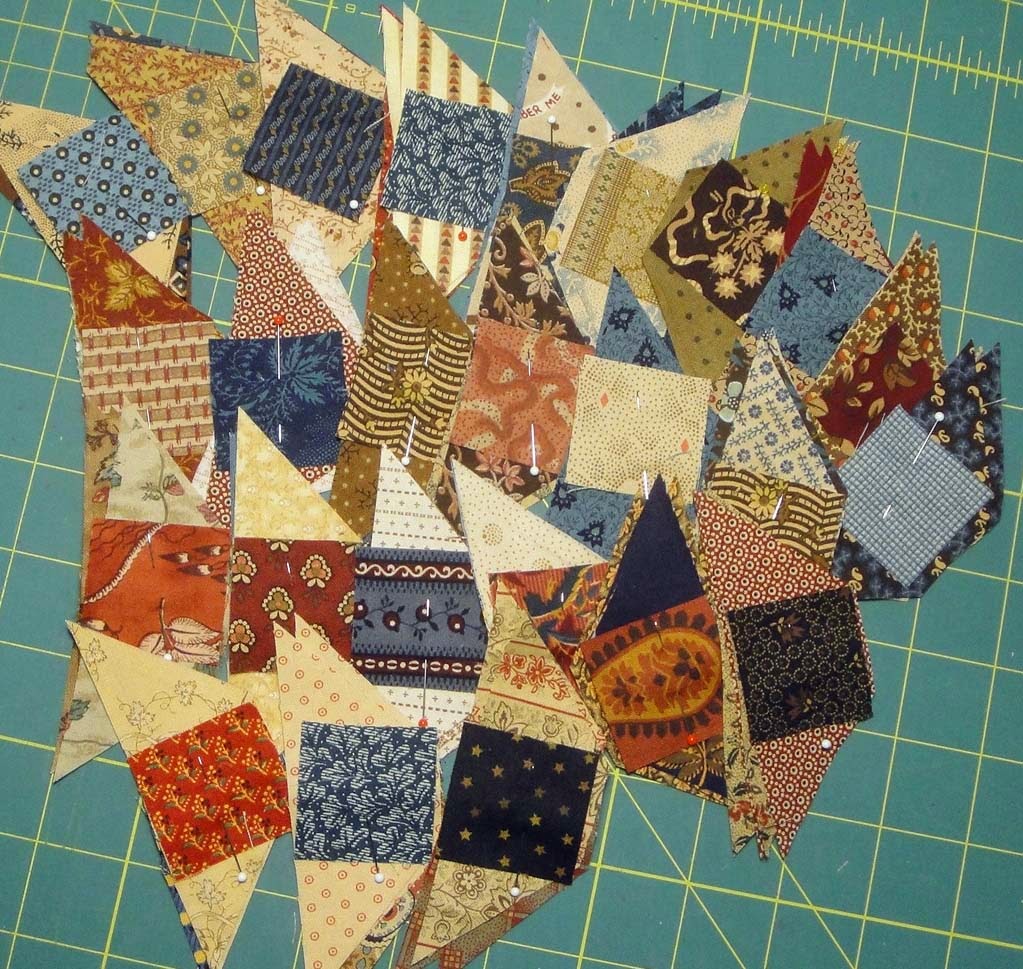 Whew!
I sewed up the mini Dresden Plate and thought about making a pincushion with it. I sewed on a backing and stuffed it with walnut shells and, sad to say, 1) it did not look good and 2) it was really flat. The pins just went right on thru to the table beneath. So I took it back apart. Now I’m thinking I might make it into a little coaster and call it good. 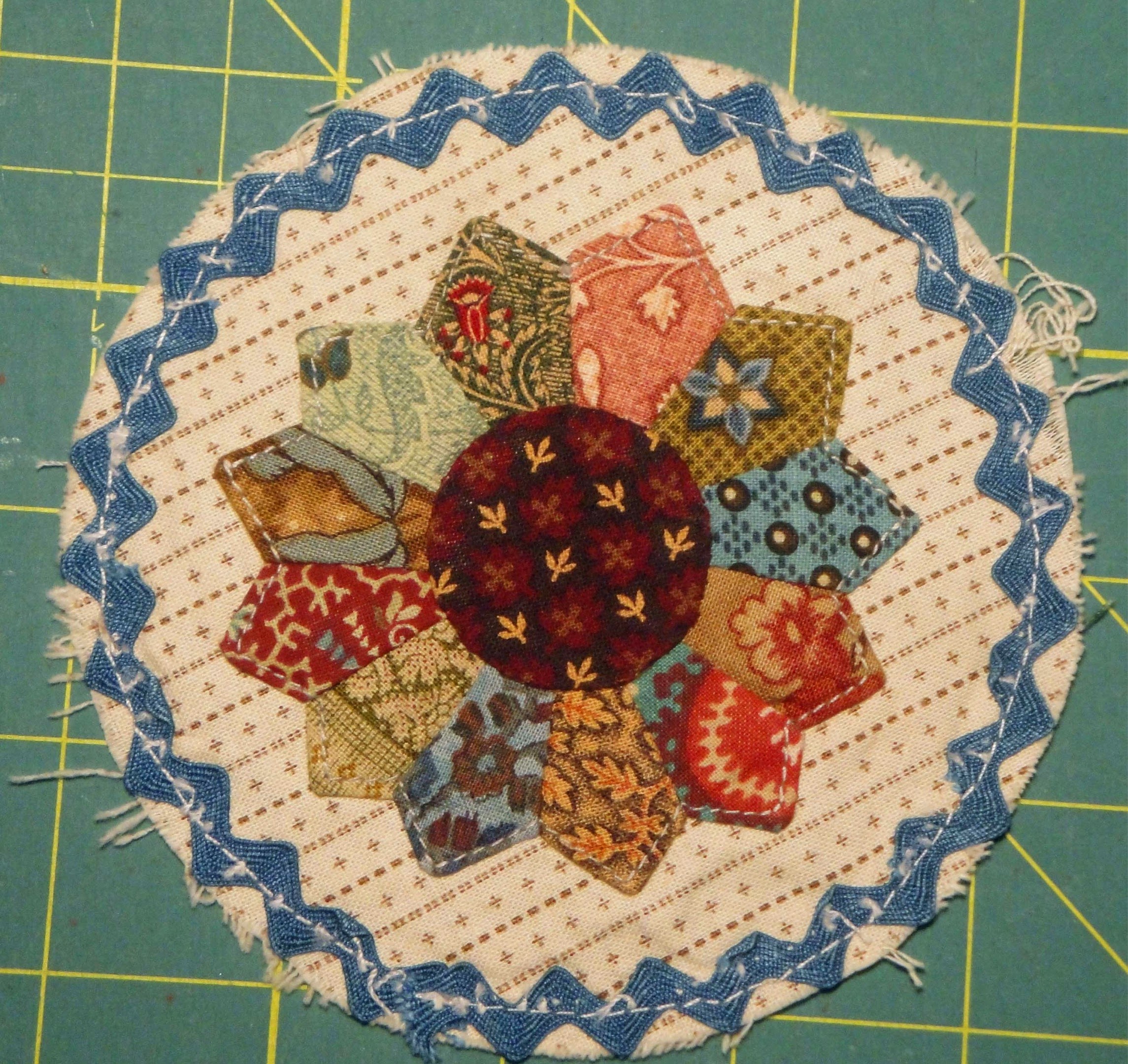 It is awfully cute. I never ever get tired of Civil War era reproduction fabrics. They just make me happy.

Posted by Terrie Sandelin at 6:29 PM 8 comments: Links to this post

A Little of This

Here I am, visiting after such a long while. And using a new blogging app to boot. We’ll see how this goes.

I could explore why I’ve taken such a long break from blogging, but I think I’ll just dive in instead — because, hey, quilting is happening.

First, one of my goals for last year was to finish the Civil War Sampler blocks. And, yo, here it is! A big quilt in a little sewing room. 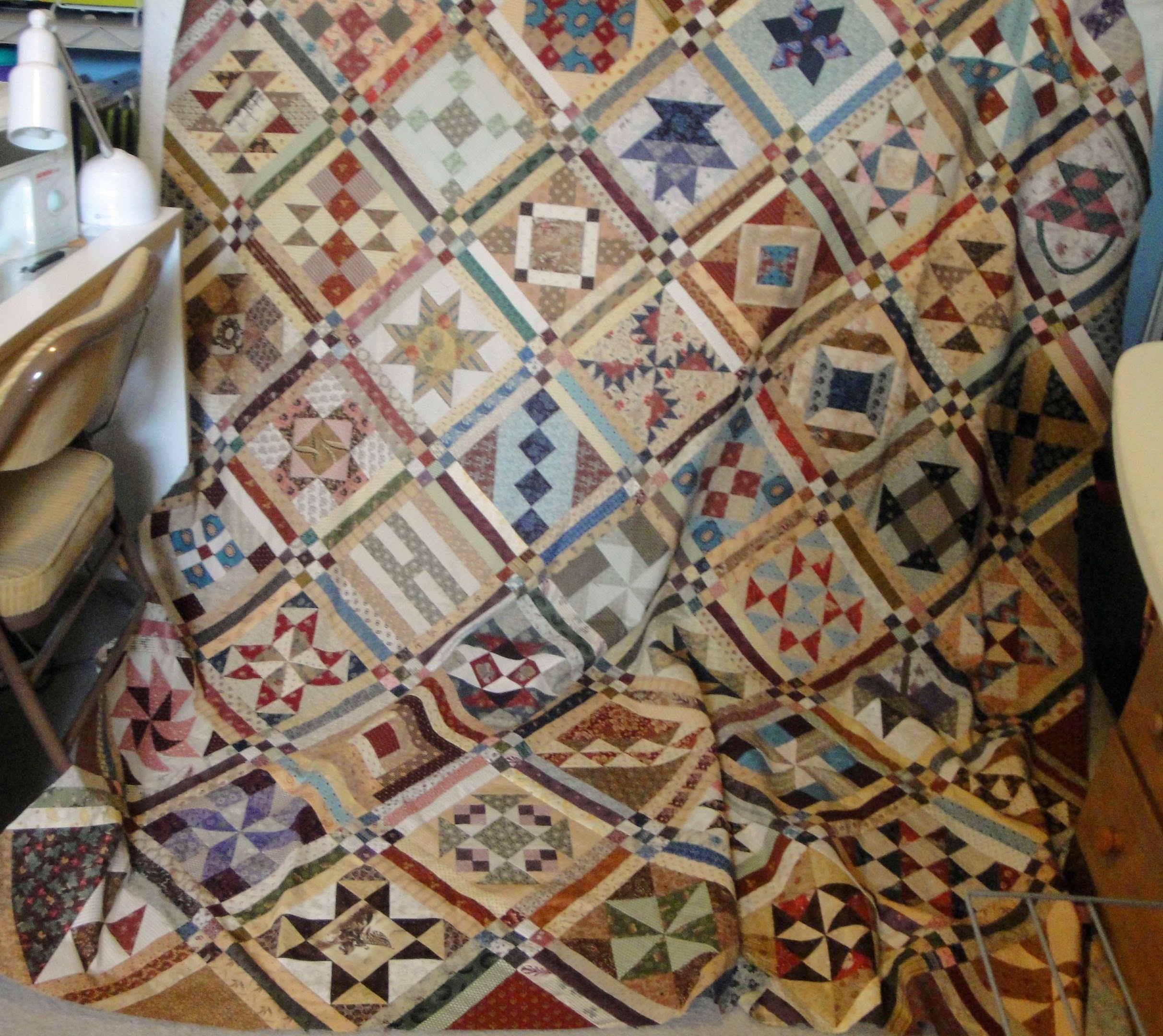 I love this quilt top.  I just need to add the borders and send it off to be quilted.

Then there’s the goals for this year. I’m feeling a really strong need to finish projects in process and I have two projects at the top of the (very long) list.  First up, a project that goes back to 1998. It was a Quilt of the Year at a local quilt shop. I finally got the center New York Beauty put together, the triangle appliqué pieces added, and the squares on point. Fortunately, all the applique had already been done. 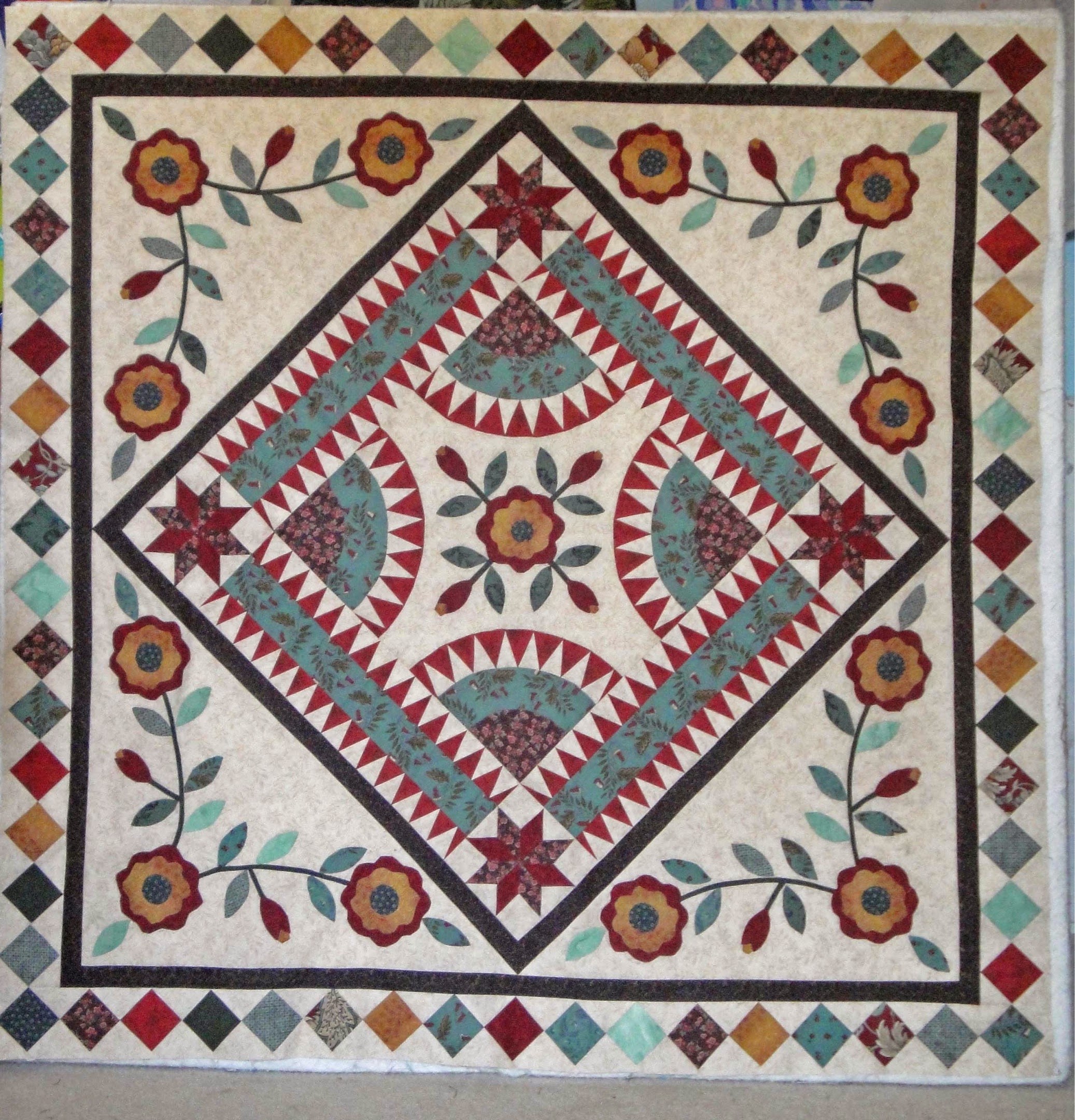 Those fabrics go way back! I still like it though, so cheers for that. Though I can see why I set it aside all those years ago. I was still pretty basic in my quilting back then. Look at the back of this 8-pointed star. 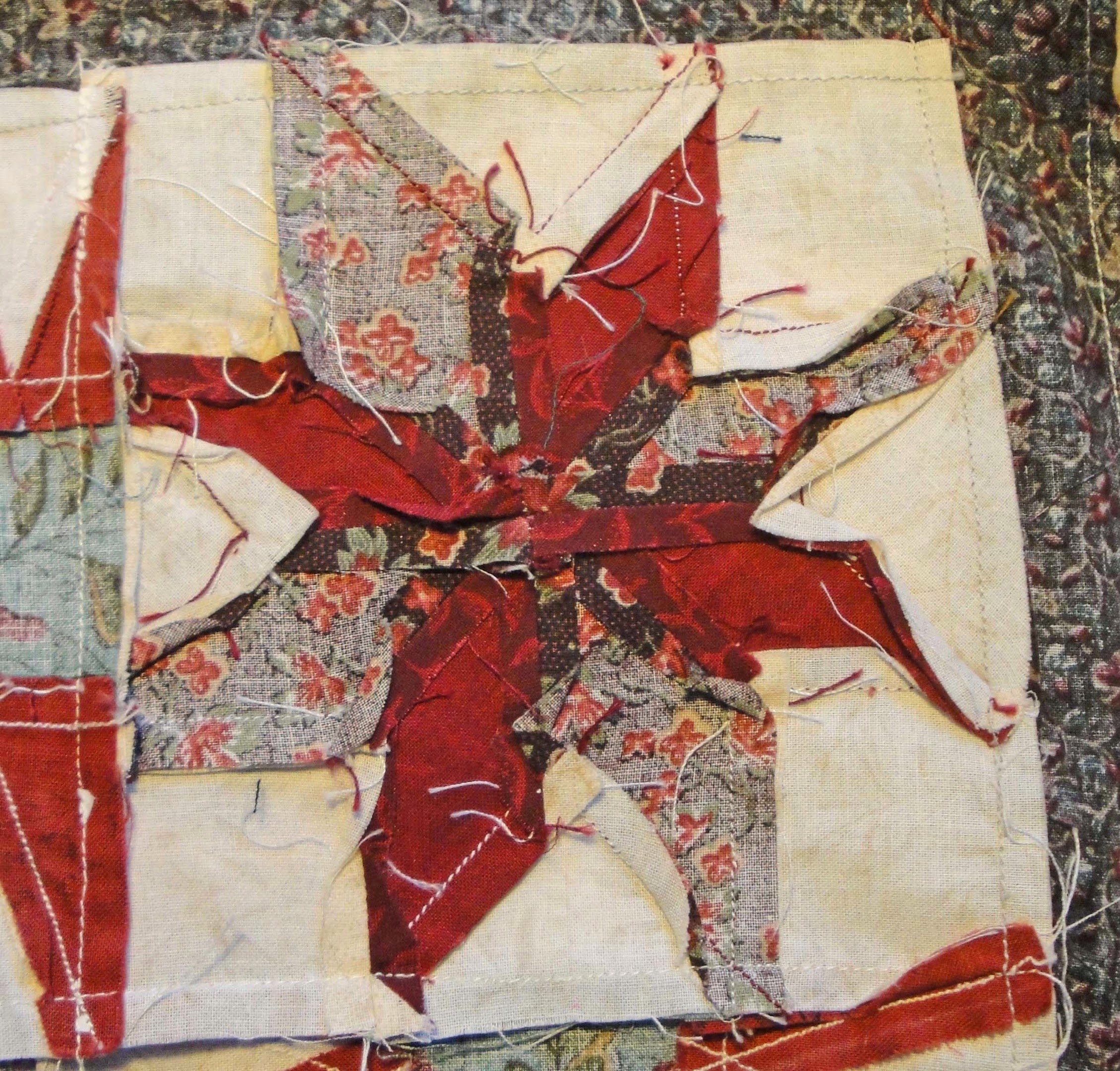 Whoa! What the heck is going on there? I showed it to my quilt group and one friend said, “Just don’t ask a longarmer to quilt in the ditch!” Another suggested I could send it to a quilter I never intended on asking to do a second quilt.  So helpful, my quilt buddies! Now, I could have tried to fix that up more, but I decided this quilt is what it is — some of what I could do back then combined with what I can do now. Though I’d like it on record that while my 8-pointed stars may still lack a little in perfection, they look way better than those first efforts. Meanwhile, I have three more pieced borders to add.

I made myself happy by making up a rag quilt entirely out of fabric I had on hand — which means it had been sitting around over a decade. 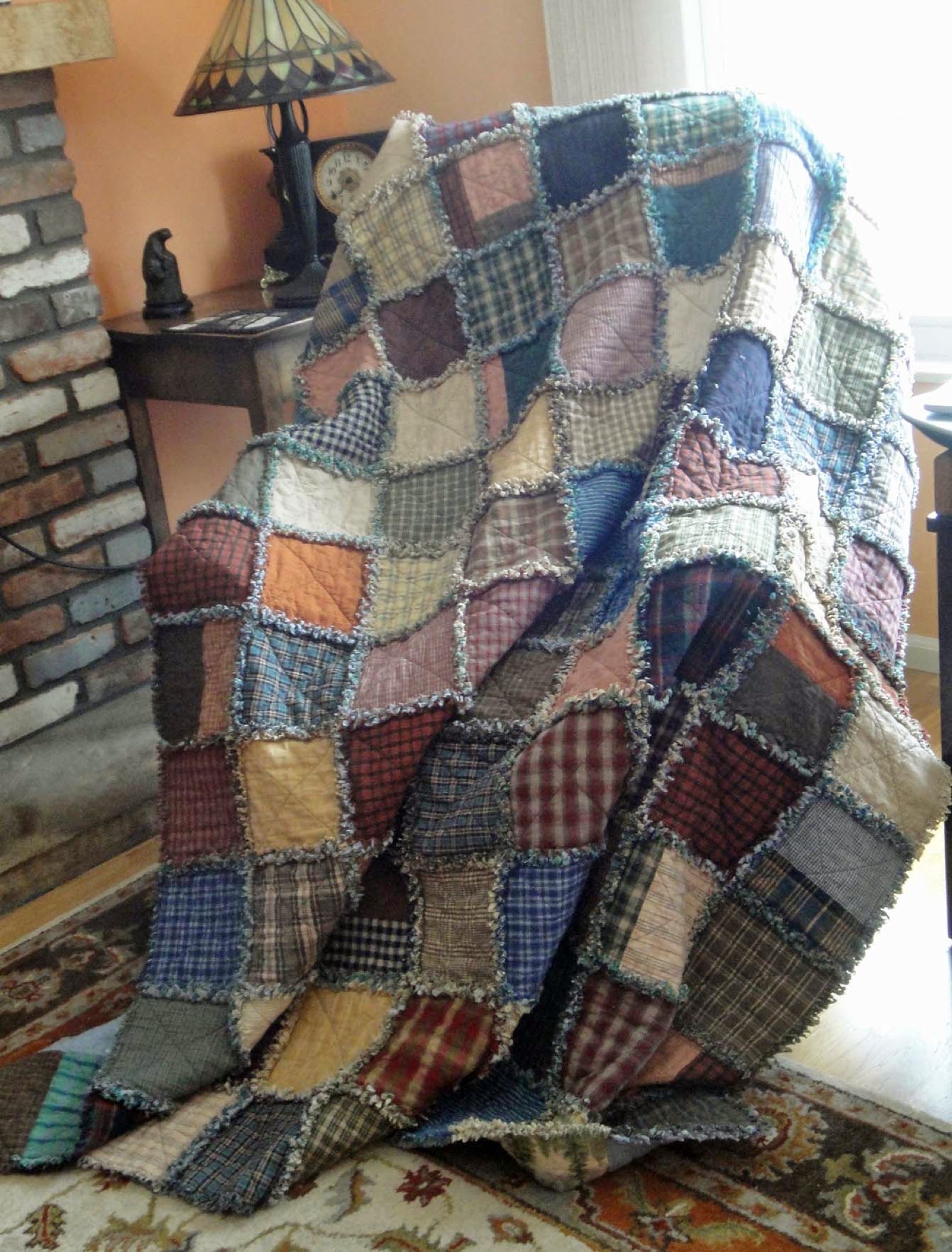 And because I need some new things going as well, I decided that I might (ever so gingerly) dip my toe in the applique waters.  (Shhh! Don’t tell my friends! If I bomb out spectacularly, I just might want to keep that to myself.) I bought the Appliquilt tools. Then I picked up a couple of boxes from Temecula Quilt Co. to store them in. The one bigger box is perfect for that. I lined the bottoms with bits of wool.  So, so cute. 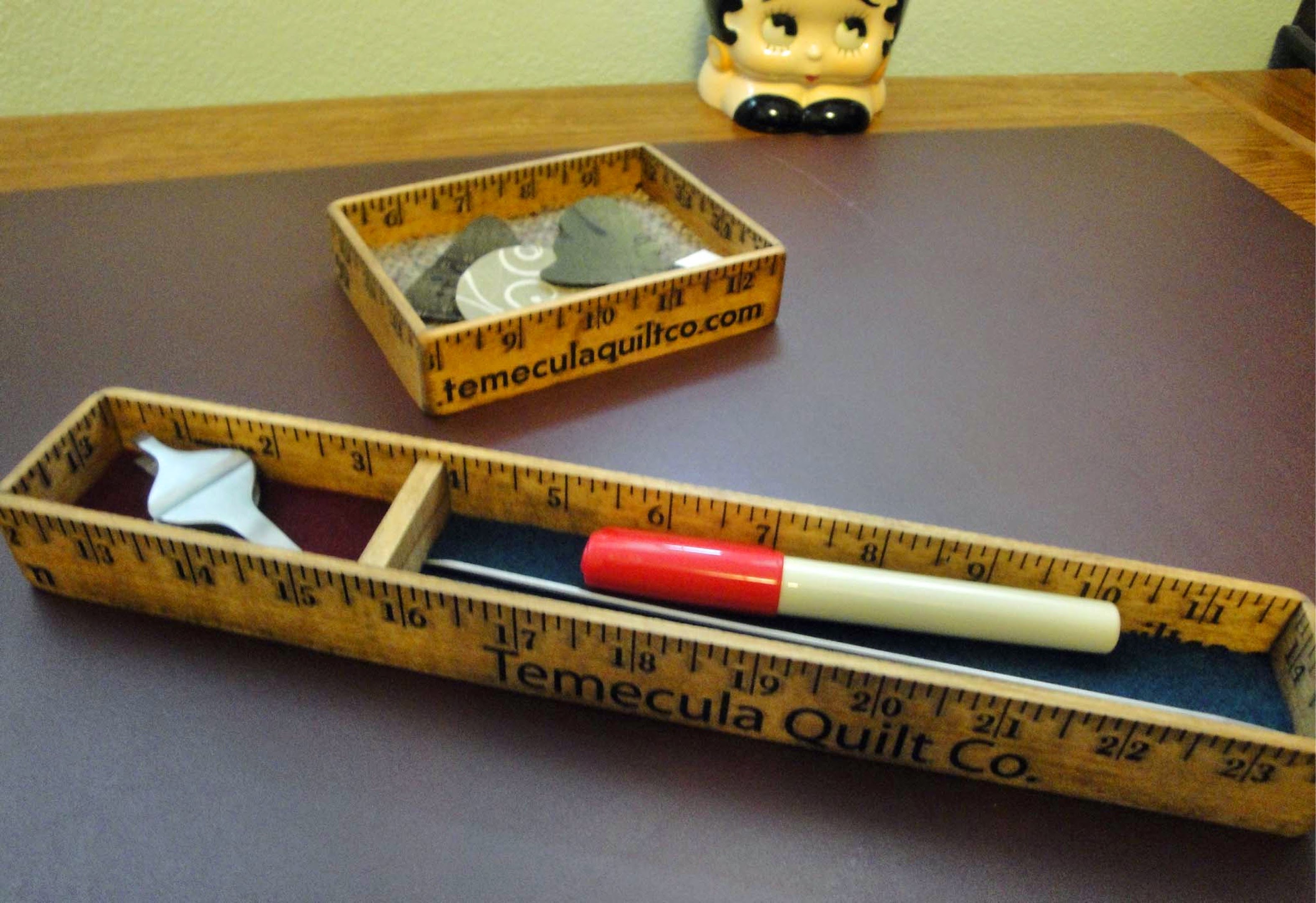 I have really enjoyed working on a big quilt again but I still love the little ones, which I why I had to pick up a template for making wee Dresden Plates. 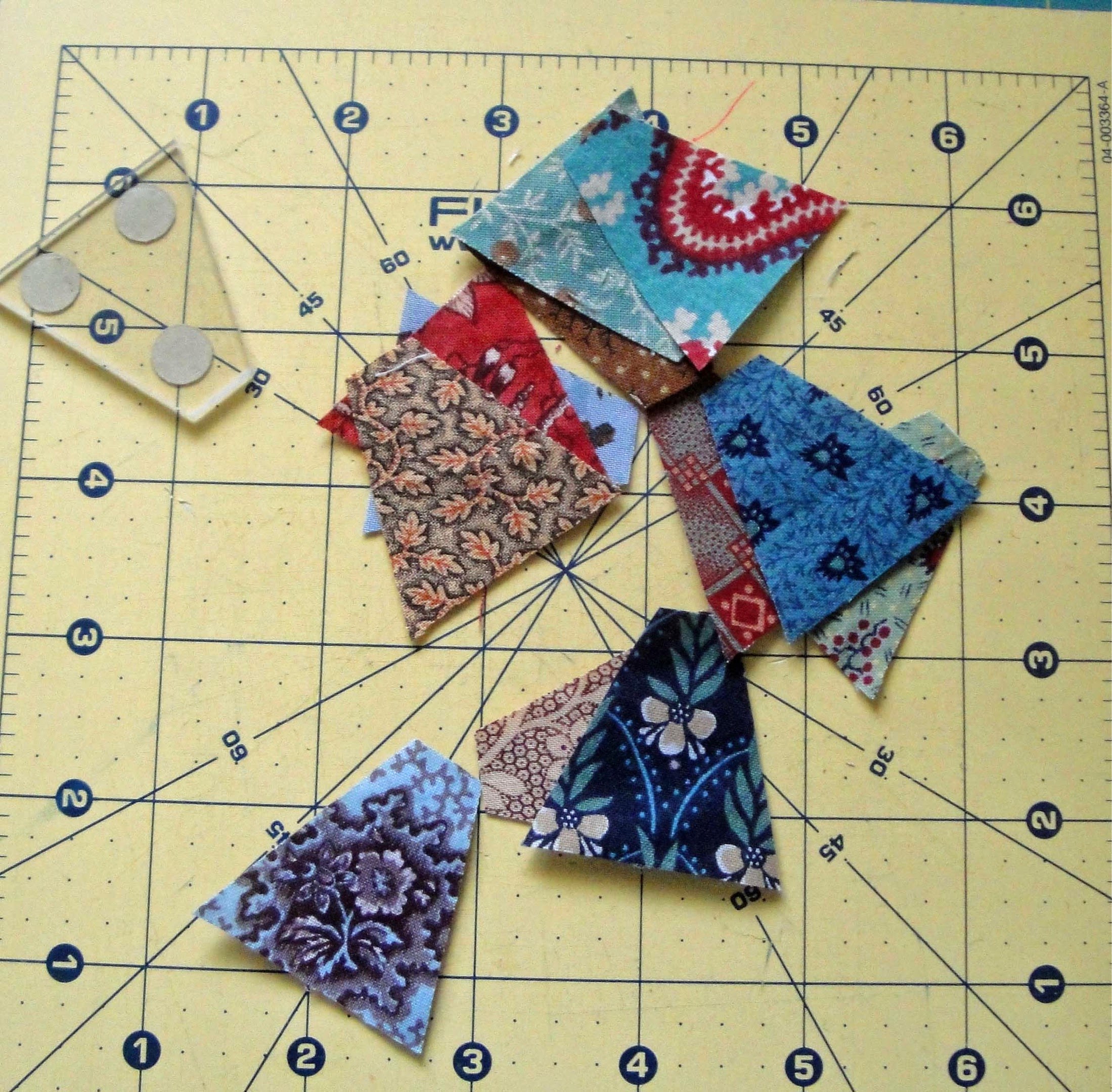 Whew! How do you balance out finishing up the old and starting the new?

Posted by Terrie Sandelin at 9:35 AM 2 comments: Links to this post 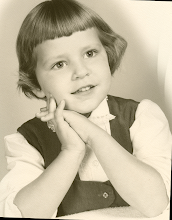 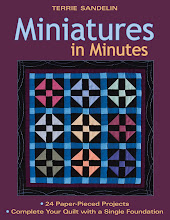